A young Auckland couple, who had a premature birth scare in November, have become parents to a girl who may be the first Kiwi baby born in 2022.

It came as both a shock and relief to first-time mum Sapphron Jackson, 18, who went into labour around 4pm in the middle of a low-key family New Year's Eve celebration in Glen Eden.

Just over eight hours later, Percí Luau Jackson-Matthews was born at Waitākere Hospital at 12.22am on January 1, 2022.

The healthy baby girl weighed in at 3.32kg.

But there were several trials both during labour and the pregnancy itself - which spanned Auckland's four-month lockdown - to get to yesterday's happy conclusion.

"I was just tired of being pregnant," Jackson said. "When I was 33 weeks we had a pre-labour scare, where she could have come as a premature baby. When I got into hospital [in November] they gave me steroids to slow everything down and we were just on the waiting game pretty much because the steroids don't help for everyone."

But they did help and with a due date of January 9, father Lucio Matthews said he and his family were surprised when Jackson began to get contractions on Friday afternoon.

"We were all with my family, me and my partner. We were just celebrating New Year's like everyone else and then yep … about 4 o'clock she started having those intense contractions," the 19-year-old said.

Luckily Matthews' mother Keziah is a midwife and was on hand to help Jackson for several hours before they headed to Waitākere Hospital shortly after 9pm.

Jackson said the birth was painful but given that Percí was almost prematurely born in mid-November she was extremely thankful for the eventual timing of the birth.

"To be honest I was stoked that she came on New Year's," Jackson said. "I was 38 weeks and five days when I delivered her."

Pregnancy during Auckland's 107-day lockdown in 2021 was also challenging for the couple. 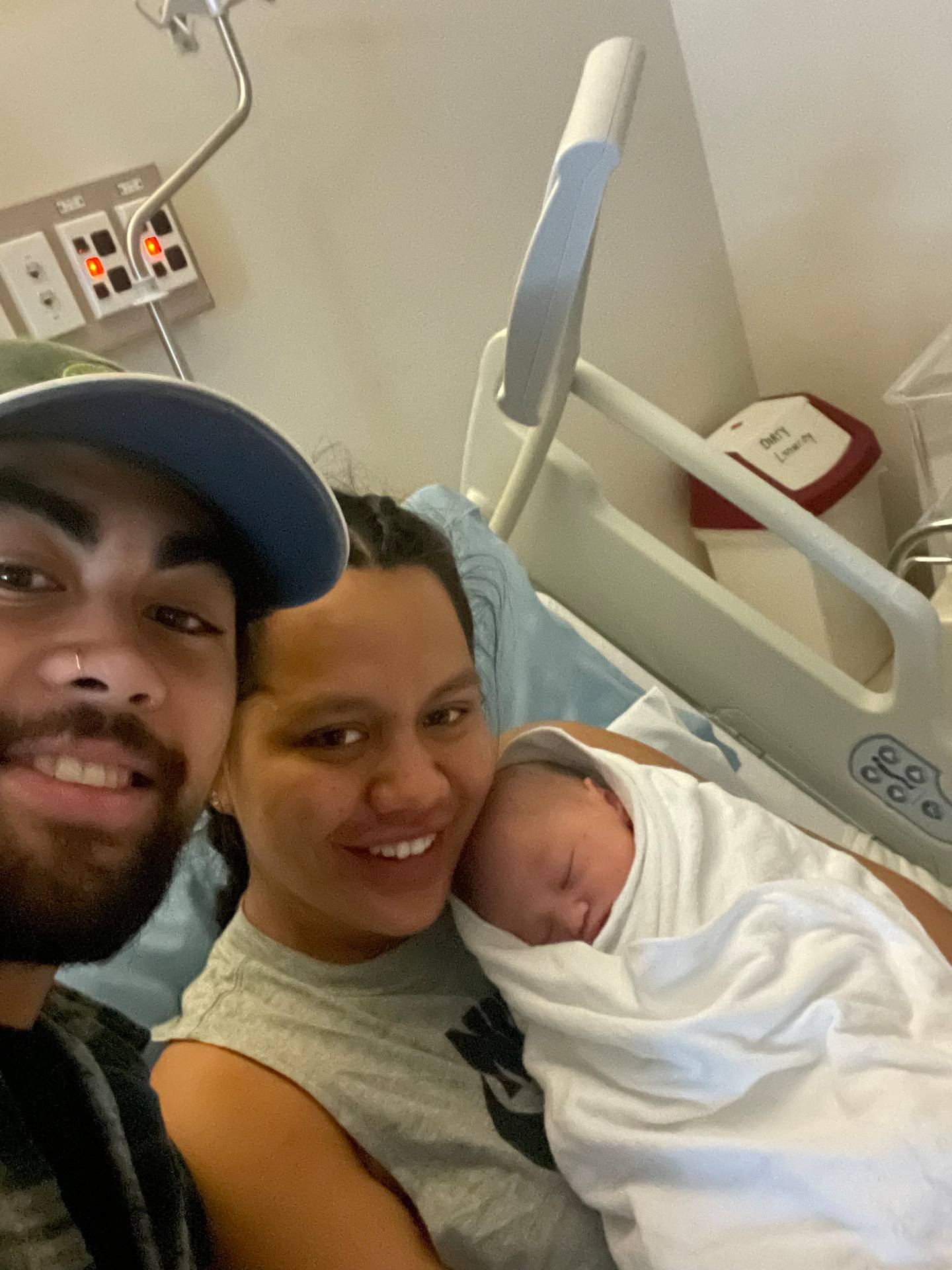 Lucio Matthews, 19, with partner Sapphron Jackson, 18, who gave birth to Percí Luau Jackson-Matthews at Waitakere Hospital at 12.22am on January 1, 2022. Photo / Supplied

"It was difficult. It was more [for Jackson] you know. I was just attending to her and stuff," said Matthews, who is starting an apprenticeship to become a certified drain layer.

Jackson, who is also completing a makeup course with the hopes of starting her own home business, said lockdown prevented as many midwife checkups as she would have liked.

"It did [make it more difficult being pregnant during Auckland's lockdown] due to not being able to have support people coming for scans and my midwife appointments."

The new mum said both their respective families were "very happy and very eager to see the baby this morning".

Matthews said Percí is in good health and passed all her medical tests before the new family unit left Waitākere Hospital around 11am yesterday.

Jackson was equally thankful and excited.

"I feel blessed to have her with the whole long difficult journey of nine months with her. Very happy that she came out healthy and everything's going fine with her with the scare that we had earlier."

While Percí's birth at 12.22am January 1 is surely one of the first in 2022 in New Zealand, it is not yet official whether she is the very first.

The Herald has not yet heard back from all of the 20 District Health Boards around the country on when their earliest births yesterday were.

But of the dozen or so who had replied, Waitematā DHB on Auckland's North Shore - which encompasses Waitākere Hospital - is also responsible for the next earliest after Percí.

A baby was born one minute later at North Shore Hospital at 12.23am yesterday.

The next earliest was Waikato Hospital with a 12.49am birth.

Leree Newton was the first person to give birth in 2022 at Rotorua Hospital.

Newton's baby arrived at 3.46am yesterday morning and is her first daughter after three boys.

"It feels different because this is my first girl and it's the first day of the New Year. It's overwhelming." 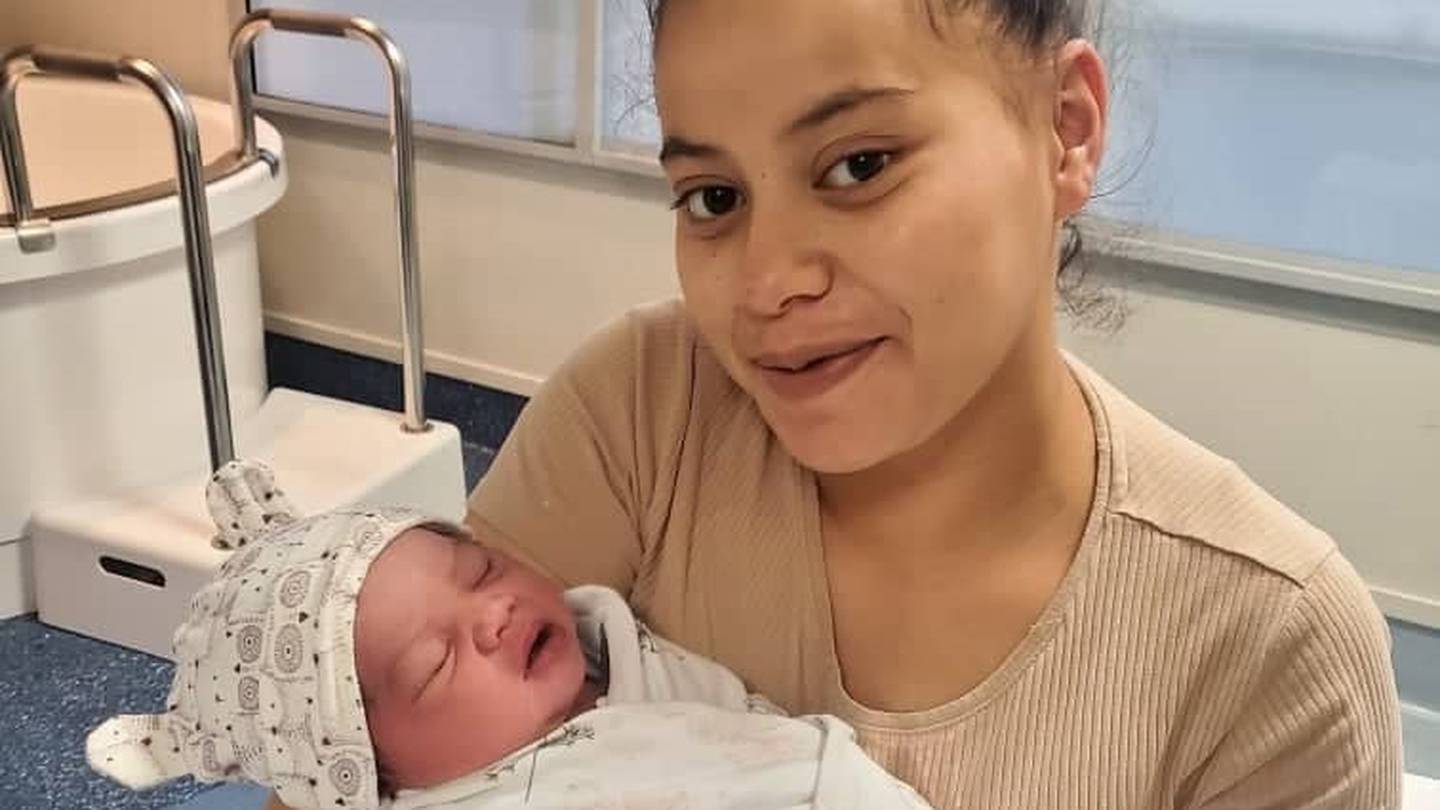 Leree Newton with her baby girl born in Rotorua Hospital in the early hours of 2022. Photo / Supplied