The E Tipu E Rea Whānau was established following the successful implementation of a teen parent project at Auckland Women’s Centre. This project highlighted the need for an independent, Auckland-based teen parent service.

We began as Thrive, officially established in 2011 to support, advocate for, and empower teen parents in West and Central Auckland.

The journey to becoming the E Tipu E Rea Whānau came about because of the belief in upholding the mana and hauora of young Māori – and with the support of iwi and kaumatua, we embedded a kaupapa Māori approach to support the health and social needs of young whānau from all backgrounds.

E Tipu E Rea and Ngāti Pāoa see the work we undertake as a movement that brings young hapū māmā,  mātua taiohi and their tamariki together; we want you to be part of our work; you are the E Tipu E Rea Whānau.

E Tipu E Rea, meaning “to grow and to thrive” from a kōrero by Ta Apirana Ngata, encompasses our kaupapa on three levels:

Tikanga values are at the heart of our work at
E Tipu E Rea as we serve our community as a whānau.

Behind all our mahi is the unconditional love for our rangatahi and community.

As we uphold the safety and security of young parents and their babies.

Acknowledging the strength, potential, and self-determination of matua taiohi, hapū māmā and their tamariki and their inherent right to thrive.

Knowing and honouring those who walk with us on this journey, we encourage young parents/whānau to connect with their whakapapa.

E Tipu E Rea kaimahi are committed to providing a warm, accepting, and nurturing environment for our mātua taiohi, hapū māmā and their tamariki. We challenge the systems that discriminate against mātua taiohi, develop their skills, and grow their leadership to enact their own rangatiratanga.

Our team is made up of both public health leaders, whānau violence prevention experts, and highly experienced and dedicated social workers and youth workers who offer a kaupapa Māori approach that is tailored to the needs and challenges of mātua taiohi, hapū māmā and their pēpi/tamariki.

Our organisation was nominated for the NZ Community of the Year Award in 2018 and 2019. 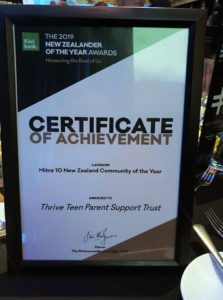 The heart depicted in our E Tipu E Rea tohu represents mātua taiohi and their pepī growing, learning and thriving.

To learn more about our services and how we can help you or your loved one, connect with our team.